Today I have a floor you could eat your dinner off.
Not in the sense of it being so clean.
In the sense that there is so much freaking food on it you could feed a family for a week on your findings.
Lovely.
Just about to pull some of my spare time out of my back pocket and clean it.
Oh no I’m not, I’m going to sit on my ass and blog about it whilst filling my face with buttons!
Here goes…
Well, here we are again. Weaning time and I am reminded, yet again, how different it is to be a mum of two under twos as opposed to a mother of a single child.
First time around weaning was an absolute dream.
My baby was so utterly relaxed, that I was able to swan around my kitchen; I say swan around, it was the size of a postage stamp and I could touch both walls with my arms outstretched but, never the less, I was able to cook her meals from scratch whilst she watched on from her highchair, sucking on a spatula, all the while I was talking her through what I was doing as though I was a guest chef on James Martins Saturday kitchen. It was a sight to behold I am sure!
The only ingredient lacking was Olly Smiths wine recommendations to go with each offering. I bloody loved it.
Dishes included lamb cous cous, fish pie, a vast array of steamed and puréed vegetables and lovely risottos and pasta dishes. Mainly thanks to Annabel Karmel. 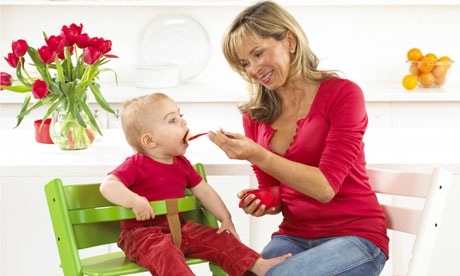 This time round things are somewhat different.
The baby is crawling about all over the place and despite having a playroom in which she could crawl, roll, dribble and play to her hearts content, she does not want to be in there unless I am too.
Her big sister wants to throw tea parties every two minutes and if she’s not doing that she want me to read this or this or stomp around in the garden or sweep the kitchen or do 101 other things that require my undivided attention.
All in all there is little time for affectionately steaming some organically grown butternut squash and poaching a hand reared chicken’s breast to serve on a bed of scented arborio rice. So, I admit, I have been slow in kicking off the weaning this time around.
(There have been other things going on too, I’m not a totally dreadful mother!!)
A happy side effect of both of the girls being so poorly over the last few weeks has been the baby’s reduced appetite. The spots on her tongue have meant that milk has been the best thing for her. Hooray!! Every cloud and all that.
However, we are no longer a poorly household with an Ox blood X daubed on the door. The pox has passed and now weaning must begin in earnest.
So far I have excelled at toast, rusks and Plum.
Yup. I’m a convenience mum. For some reason in this sentence I want to say Mom- I don’t know why!
Last week a big box of Plum baby food was delivered thanks to a chance meeting at a hen do…you know that time I went to the hen do and met the naked waiter- I do. Lets have another snap, just for kicks. 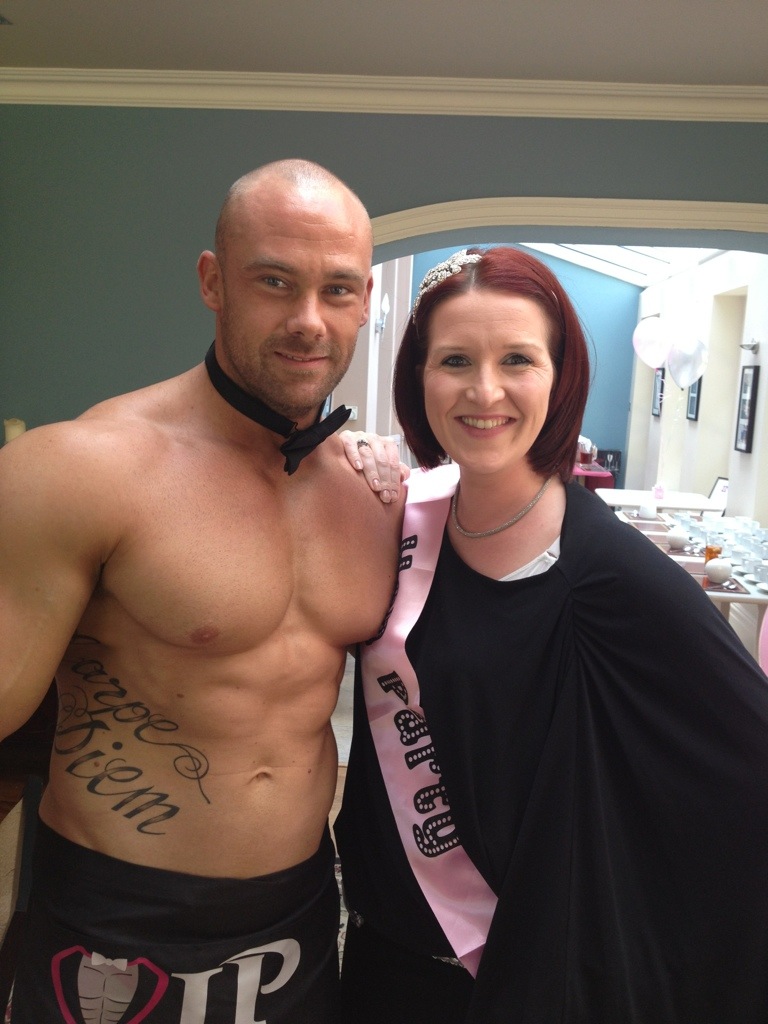 I met the lovely Kate. To be honest with you I met her ass first. It is immense- immense in an amazing way (she was wearing some gorgeous, wet look trousers), not a size way, and I considered seriously not being friends with her because of it. But, I powered through it and spoke to her. Yey me. I know it sounds like I have a girl crush on her. This is because I do.
Anywho…
Turns out that she works for Plum-baby and, despite my weird introduction, they have allowed me to become a Plumbassador woo hoo! They have sent me two bags of their gorgeous baby pouches, toddler meals as well as tee shirts and bibs.
So, despite my earlier protestations that we have held our last party for some years, I will now be playing host to a group of yummy mummy’s and their various ankle biters to introduce them to the wonders of Plum Baby. Contact me if you fancy coming over. Make a mess in someone else’s house for a change. Bring wine. 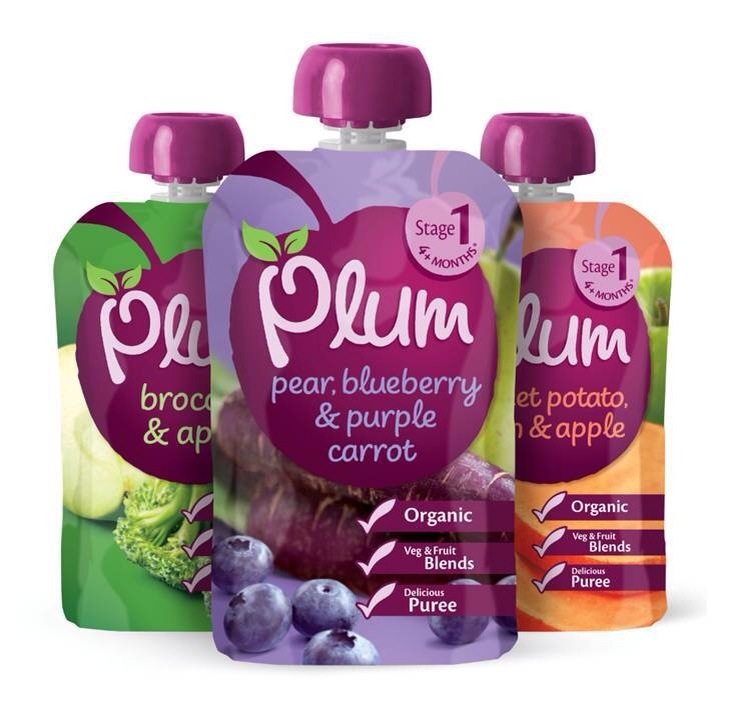 To be honest I was sold when I saw that a lazy mother could squeeze the pouch contents directly into their child’s mouth and hey presto, a balanced diet without having to dirty a spoon let alone a saucepan. But, for those that have maintained some level of standards, they might be interested to know that the company is incredibly ethical business started by a mother who was sick of seeing jars of grey mush on the supermarket shelves.
Plum can now be found in most big name supermarkets and, if you are so inclined, you can order from the website. Excellent.
So far, the baby baby has particularly loved the Apple and Blackcurrant Purée. It smells like actual food and although it is great on its own, can be swirled into baby rice and porridge for a bit of variation.
The toddler really loves the minted peas with lamb meal.
To be honest, she is way too old for this now but, when she was poorly it was one of the only things that she ate so that has got to be a big positive. I have tried it. I know that sounds minging but I have. It tastes…of pea and mint! It is nice- obviously it is mush but it is tasty.
In Hollywood there is a craze called the baby food diet. It is rumoured that it is how Jennifer Anniston maintains her amazing figure. She is in her 40’s for crying out loud. Rediculous. 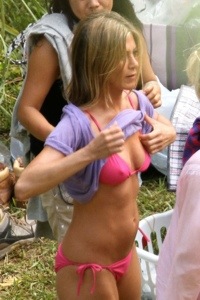 Surprisingly, I am not regularly stopped in the street and asked how I maintain my mum tum. The answer my friends, can be found at the bottom of a sharing bag of Cadbury buttons washed down with a gin in a tin. Tonight’s dinner, I kid you not.
However, with the new school term I have, for the umpteenth time this year, decided to give the old health and fitness kick and other crack, having now tried a variety of the Plum range, I would be only too happy to give this craze a go. The veggie biryani is genuinely something I’d eat as an adult (and have). The toddler preferred it once it had been mixed with a few spoons of bean juice to make it a bit wetter. 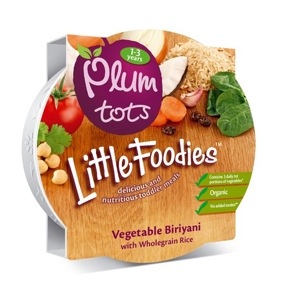 So, there you have it, my early views on weaning for the second time, and on the Plum range.
I will fill you in again once I’ve held the Plum Party and can share the views of some other mums and babies.
If you do have the luxury of time, it is brilliant to be able to make your own purées, pies and anything else that you can find on the old tinter web but if you are busy playing or working or cleaning or sleeping or living or any of the other things that an average parent has to do in the average day, put a plum pouch or two in your pocket and crack on.
NB- The pouches ain’t magic. Your baby will still get food all over the place so don’t leave the house without a bib and wipes. You will look like a novice.
Also, if your child is heavy into blowing raspberries whilst eating, you may want to put a spare top for yourself into your changing bag. Otherwise you might rock up at Baby Ballet looking like a mad woman with purée matted hair and a left boob apparently leaking mango juice. (Happened to a friend, I would never be so school girl!)
Love
Muma Leary.
I make the mistakes so you don’t have to!!
XxxX
Point to note- for clarity, Plum Baby provided me with a selection of foods from their weaning and tots ranges.
Despite this, all views are unbiased and genuine.
Second point to note- Plum baby don’t endorse the baby food diet (as far as I know) unless of course it is for genuine babies. Then they are all over it!

In the Night Garden. Now you are 2!
Scroll to top