For the past two days I have been paying a heavy price for our weekend trip to Madrid.
I have been paying in patience and it is running out fast!!
Since we got home late on Sunday night the big little has been a tantruming toddler of epic proportions.
I think that it’s my fault really.
I constantly marvel at how clever she is, at how much she understands and remembers and yet; rather than talk to her about the fact that mummy and daddy were going away for the weekend, and that she and her sister were going to have a lovely time with her Auntie, Uncle and Grandma being spoilt and cuddled and loved, I left it to the last-minute so as not to make it seem like too big a deal.
What a mistake-a to make-a. 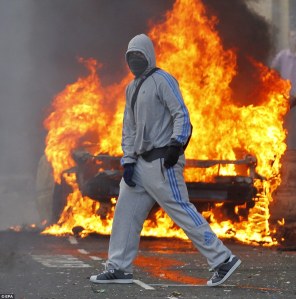 It culminated this evening in a thirty minute stand-off of her in an empty bath refusing to tidy away her stick to the bath letters.
Hardly a massive deal.
Many a night I forget to take the water out, let alone the dripping wet flannels and sponge letters thus ensuring they are soggy and stinking the next day but; following the screaming and crying hissy fit all the way to and from the shops, where, by the way, I bought her and her sister a gingerbread duck (what a flake!) the ear bleed inducing wailing and the blatant refusal to do anything I asked, I had to draw the line somewhere lest I be left with a looting ne’er do well teenager because I was too damn soft with tidy up time.
Yup, that’s how it starts people. That’s the evidence gleaned from the 2011 riots. (May not be completely true but it’s a slippery slope; particularly when you’re bathroom based).
I was not going to allow myself to be defeated by this simple request tonight. I did wonder whether she was ever going to bend and how on earth I could explain pneumonia to the docs if she didn’t.
Anyway, after draining all the water, dressing her sister whilst gently cajoling and trying the Mary Poppins trick of ‘finding the fun so, snap, the jobs a game’ con and finally stony silence, switching off the lights and feeling like the worst human that has ever walked the earth, she put the letters away whilst I held the pot and praised her efforts.

I WON. I WON. (Sort of).
I know I should be bigger than this, I know she is just testing boundaries and checking I will be consistent and nothing that she does will ever stop me or her daddy loving her (which clearly it won’t just in case you’re ever reading this BG!) but, I say it again.

I WON, I WON!!! Boom.
The upside of this hideousness though is I know that she has got staying power, she ain’t backing down if she wants something and I hope that she never loses that but, man alive, it’s tough having to battle a toddler and, when they’re old enough to gang up it’s going to be that much worse!!
Just for future reference; how do you deal with telling your kid that you are going away without them?? I need some suggestions for next time or I’ll be a wreck wondering about permanent psychological damage; to us all.
Lots of Love,
Muma.
XxxX
If you like my blog, you are welcome to nominate me for a MAD award. I’d love it if you did.

Me time, Meal Planning and Making Lists…The Aviva Stress Less Test #2
Did you hear the one about Mr L's new job?
Books, Babaslings & Big Girl Beds #Lovethelittlethings
Nudey Rudey, New York & #nomakeupselfies…Love the little things #8
It's my birthday and I'll cry if I want to.
That was the year that was…
0 replies