Evening All! What have you been up to today? Anything special?
Mr L and I have mainly been running!…The BTR Liverpool Half Marathon.
I’ve run this a couple of times before, once in 2007 and again in 2012 with my sister and my friend when it coincided with my first ever Mother’s Day and I decided this new year I wanted to get back into running so I signed up.

I say ‘get back into running’, I’ve never been a die-hard get out there every day kind of gal. I think perhaps, as with so many things, I am fearful of putting in the hard yards, following a training plan, trying my absolute best and still coming up short.
I guess I’m frightened of failure and by being able to console myself that I didn’t give training my absolute commitment I can still get around that.
Just once I would like to finish something and say, yep- that was me, I held nothing back, I tried my best and I’m proud of my efforts, whatever the result. And that isn’t specific to exercise. But, that’s not the case this year and man alive, I paid for it!
Any who, enough of the soul bearing shenanigans. How did we do…
The morning started with an arctic blast of wind and rain before we’d even left the house but, undeterred, we got up, got ready and got out. 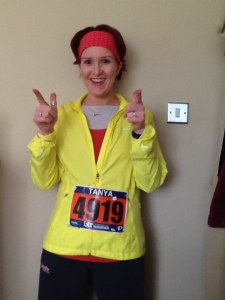 We drove over to town and parked easily with loads of other runners at Liverpool One and walked over to the starting area.
I’d say having to scale a fence to get to the bag buses isn’t brilliant planning but, no biggy, thanks to hot yoga I’m more than capable of getting a leg over. We dispensed of our warm clothes and, because I value the relationship I have with Mr L, we parted company.
We’ve tried running together before. It did not end well. Someone encouraging the other that they can ‘Keep Going, it’s all in your head’ when they are clearly about to expire is not what I want from an exercise regime so, we have decided that lone running is the way to go. We can meet again at the end and dissect the race mile by mile- happily, today you get to share all of that! You lucky things!
Well, the last time I put a trainer on my foot was for the ‘Wrap up and Run’ Tatton Park 10km which was nearly a month a go so, my training regime has been mainly fudge and yoga based so, not ideal but not horrific. Particularly since I am a big believer in the premiss that 90% of the race is in your head.

The race was scheduled to start at 9:00am and my plan was to try to stick as close to the 11minute mile marker for as long as possible.
There were no markers. Brilliant start.
Not to worry, just do your thing…
Miles 1-6 were amazing. I was clocking 10 minute miles, my playlist was cracking and I was really, really enjoying it. I was able to run up the hill to the cathedrals without an issue and was internally shaking my head at the people walking by mile 2.
It was a good temperature and, because we were heading away from the coast the wind was ok plus, there was plenty to look at. My normal routine is to try to pick out someone slightly ahead of me and keep them in my sight for as long as possible, or over take them. Initially this was a guy training for the Marathon de Sables who was carrying his whole kit but, I lost him around mile 4. Great. Comprehensively outrun by someone effectively carrying a whole other person.
Not to worry, latch on to a girl wearing a purple top and am on her shoulder right through Sefton Park which was lovely, right up until around mile 8. 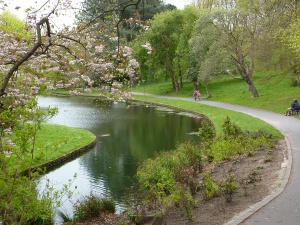 We are now around 2 miles over my last run and my legs are beginning to really tense up. My bowels decide to give me something else to think about and after the water station after Otterspool Park we starting running into an utter wind tunnel.
Horrendous.
Absolutely horrible.

I’ve lost purple girl who evidently had trained for the race she would be doing with her actual legs, not her teeny pea brain.
Mental strength is more difficult to come by when you’re being buffeted by a gale and your headphones have broken so you are only getting a crackly, tinny renditions of 7 Nation Army and Dakota.
I walked for the whole of mile 9-10 and had to stop seemingly at every bench to try to stretch out my calves again. I was not alone.

Mile 10-11 I attempted to pick up the pace again but my legs were not my own. Still running right next to the Mersey the wind was incredible. I would have been all over it if I’d had a kite.
I did not have a kite.
I was having my soul destroyed and, if Jiminy Cricket had been around he would definitely have been whispering in my ear some swotty ‘Fail to prepare, Prepare to fail’ kind of quote. Bore of Jiminy. I know.

Running through the Brunswick Business Park I knew we were nearly there. I also knew that we’d shortly be heading back into the head wind. I would dearly like to have a stern word with who ever wrote ‘this course provides an excellent opportunity for good times’.
Good times in my eyes means a large glass of wine, some lovely food and good company.
It does not mean being buffeted backwards by a gale! 😉
I’m not going to lie, I would really have benefited from some spectator support here but, unsurprisingly, the great and the good of Liverpool have betters hints to do with their time than hang around a closed industrial park on a Squally Sunday morning.
Hooray. Hooray. I’m at mile 13. Not far to go now. Take That are warbling in my ears about the Greatest Day. This could have been some sort of Chariots of Fire rerun in other circumstances. It actually looked something like this; The pain in my legs and the wind in my face plus, probably, my huge frustration at missing my target time of 2:30 coupled with seeing my sister, her boyfriend and two of my friends cheering me on means I am crying as I’m running and looking like an absolute tool.
The amazing steel band lifted my spirits for the last 100 yards or so and then, I was able to give it a proper sprint to the line. Perhaps I’m more of a 100 metre kind of gal… I heard Mr L give me a final push and then, it was done. WOO HOO. Let me get me teeshirt and goody bag…
I’m sorry WTF- you’ve run out of teeshirts?
You don’t even have so much as a bruised brown banana to offer me?
That is poor form BTR. I expect better. As Mr L (who clocked up a time of 1:45) said, it’s those taking the longest that need the medals, the teeshirts and the sugar the most. I couldn’t agree more.
BTR- I would love to get some feedback from you guys about the whole goody bag/teeshirt thing? what happened??
So, I did it. I clocked a time of 2:38 on my watch. I still haven’t had my official time from the race (another black mark for them).
We got home to no hot water a leaking shower and news that I haven’t been shortlisted for a MAD Award but, we made it. I can’t bring myself to say YEY really as I am disappointed with myself. Again.

No teeshirt. Sad times. that’ll teach me for going so slowly!

Would I do it again? Yeah, but I think I need to have a word with myself and admit that, as I approach mid-thirties, I need to respect the race. Probably 75% can be in my head from now on…
Anyone want to give the Rock n Roll 1/2 a go? I’ll check the route first though. I like the film The Wizard of Oz but I don’t want to be transported there by the bloody wind.