Hello my Lovelies- Thank Crunchie it’s Friday hey!! I hope you’ve had a good week? I’m pleased to say that I have. Thank you everyone for your kind words and comments after I opened up about feeling low lately. I am sure that being open has helped me as much as the doctor so thank you. I appreciate it more than you know.
Anyway, I have got much to report this week so lets go shall we…

READING: I think my sister has signed me up to get emails from CLOSER. Very funny Corbo! I can’t work out any other way that the following email would have found its way into my inbox this week…

Katie Price has ended her two week silence, taking to Twitter to reveal her true feelings over Kieran Hayler’s affair.

Now, baring in mind that I could also be described as a chronic over sharer, I really should just let this go thinking- live and let live and all of that jazz. This is clearly NOT what I think about this. What I think is- Katie, Katie, Katie. If you will insist on marrying everyone you meet it is little surprise that the blokes you hook up with might take the union as lightly as you seem to. I am sorry that you have been hurt but perhaps, if you took the time to get to know someone out of the limelight, spent time with your family to see if the spark survives the everyday then you might have more of a chance…perhaps? Obviously that would sell fewer magazines but it might be healthier for you and your family.
This year sees the 100 yr anniversary of the Great War- men came back from the front and kept silent about the things that they’d experienced until their dying day so you’ll excuse me for coughing my tea all over the screen when I saw your heroic 2 week silence. BORE OFF. Sorry to be a little unsympathetic!
Watched- There were lots of contenders for this slot but in the end I have plumped for the FA CUP FINAL!! Of course. After a 9 year wait Arsenal, The Gunners, from Highbury (now The Emirates) have finally brought a trophy to their new home! Mr L was made up and, despite the stupid start time, the girls were brilliant and we were able to watch the whole match, in full, pausing only to get them in their jim jams for extra time. Result! 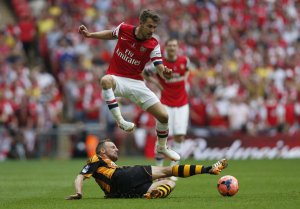 They took it to extra…squeaky bum time!

Heard: This week I am loving the new Michael Jackson song- infact, it is on the radio right this second. It is like his early stuff and is a real feel good, roof down, sun out kind of tune. Such a shame it is pouring with rain and I have a beaten up astra!  Slightly weirded out by the prospect of his ‘world tour’ with Cirque du Soleil but I bet it will be a sell out…

Worn- This week I’ve indulged in a relaxing manicure and pedicure, Lovely stuff! The bright colours really suited the sunny weather and I am now happy to parade my paws in my flip flops and flash my fingers (mainly just at myself!) Thanks Lou! Hmmm- no picture here you’ll note. That is principally because, despite taking numerous felfies (selfies of my feet) none are attractive…who has pretty feet and how do you photograph them?!
Made– On Sunday the littlies and I headed over to Sale to catch up with some other bloggers and their ankle biters and paint some pottery! It was loads of fun and we made LOADS of mess!! The paint, the juice, my phone, my glasses and most of the food went on the floor but we have got two perfect painted cups out of it and the girls and I had a blast. 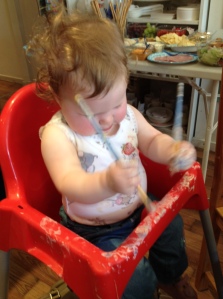 2 brushes are better than one and, now I’ve finished the cup, I think I’ll start on the highchair! 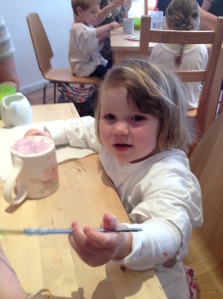 Who doesn’t love a painted bottom?!

The event was sponsored by growingupmilkinfo.com. My default thought on kid specific food is WHY?! We didn’t have that when I was growing up and I turned out ok but, it seems that there is a good reason- to do with vitamin D which you get from sunlight and only in teeny amounts from normal milk…hmmm I don’t think that it’s going to become a must buy for us as I think that the girls have a healthy and varied diet as it is but, if I felt that we’d had a couple of dodgy days- more beans and waffles than cous cous and quinoa, I might substitute the night time cows milk for a beaker of the growing up stuff to ease my conscience on the old nutrition thing. I don’t want them to get rickets (I mean Adam had a few early hits but it hasn’t worked out too well for him since he left corrie has it…) 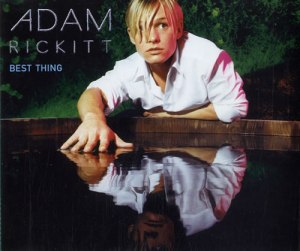 Anyway, see what you reckon, they’ve got loads of advice and recipes etc on the site plus a fun list of things every child should do by the age of three…poo in the bath?! Don’t be so disgusting- it would never happen in this house!
And lastly-Here is a picture of the big little holding a full blown conversation with a mannequin. This was taken moments after she had chosen him a new teeshirt and cardie and moments before a full on strop because I dared suggest she needed to leave her new friend. She flatly refused because he had lost his daddy!! Love the little things?! You can’t help it can you. 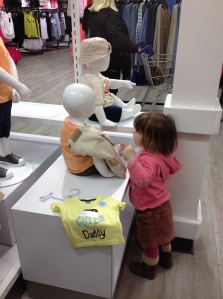 ‘Are you alright little boy?!’

Happy Weekend all.
Lots of Love,
Muma.
XxxX
This link up is hosted by the lovely Morgana at ‘But Why Mummy Why’ Ace hey?! Click the link and see what everyone else has been up to this week. 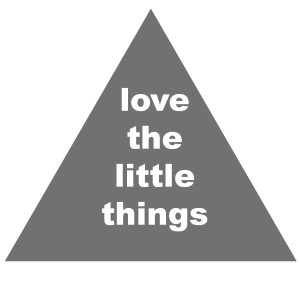 So, you think you're stressed?! One for me, One for you; A Saturday Book Review 4
Scroll to top